Hey y’all, sorry for the late weekend reading. The reason was a short six-day residency I did together with Leoni Vöglin and Fabian Raith in Muenster, at the Center for Literature / Burg Hülshoff, where we pretty much spend our whole week (with no internet or mobile reception. yeah, we are still alive, but it was hard) – so in this Blogspot I will summarize our research. It will be dedicated to Burg Hülshoff, Anette Droste Hülshoff, Biedermeier, (Future)Museums, Feminism, and Species Entanglement.

Our workspace was located within the old chambers of Anette von Droste Hülshoff, an actually pretty famous female author, poet and conductor within the epoche of Biedermeier.

Burg Hülshoff is the castle where the famous German author Annette von Droste-Hülshoff was born. Currently, the Center for Literature is being developed here. Literature and: film, performance, dance, music, media and web art, architecture, society. 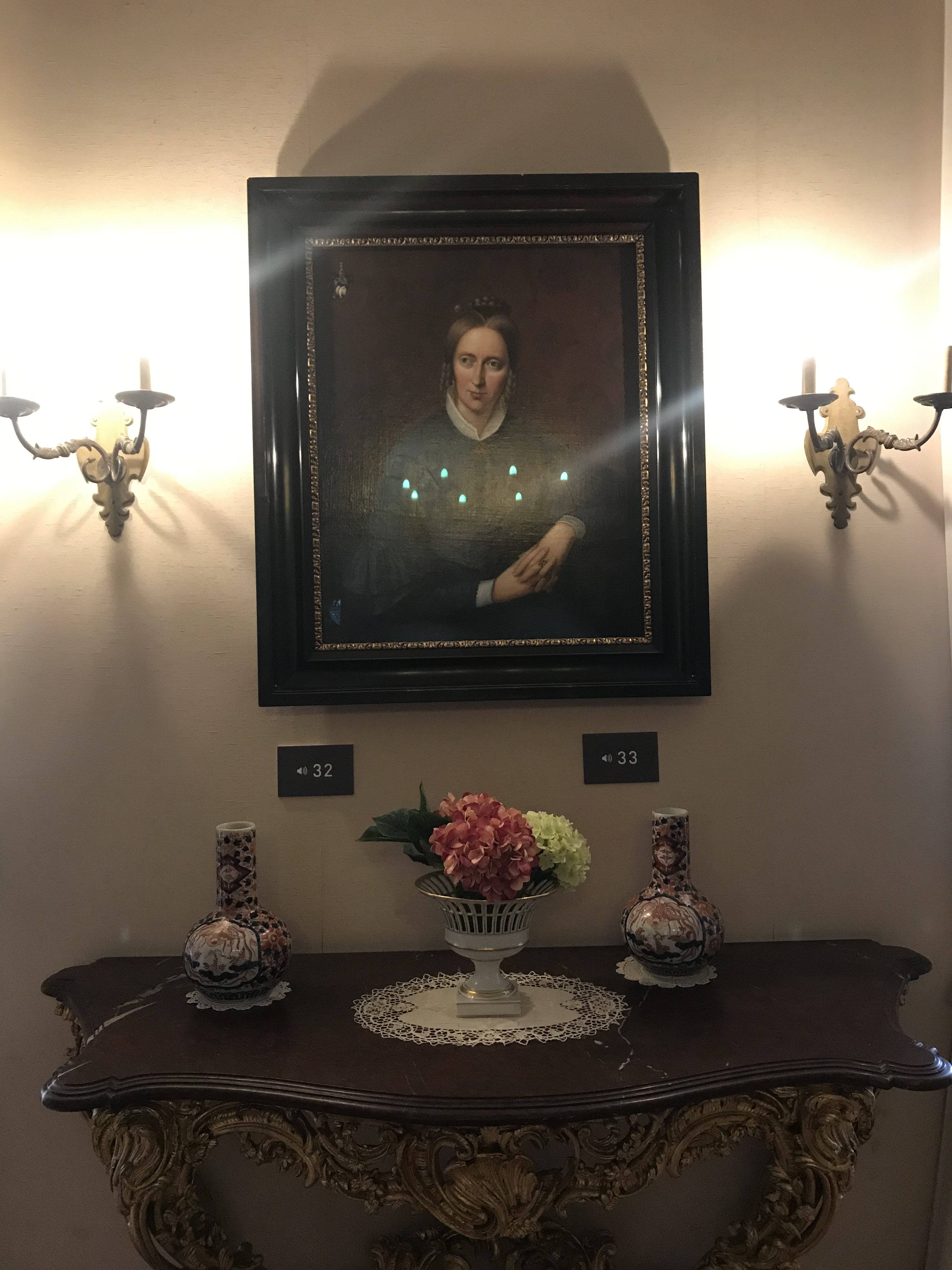 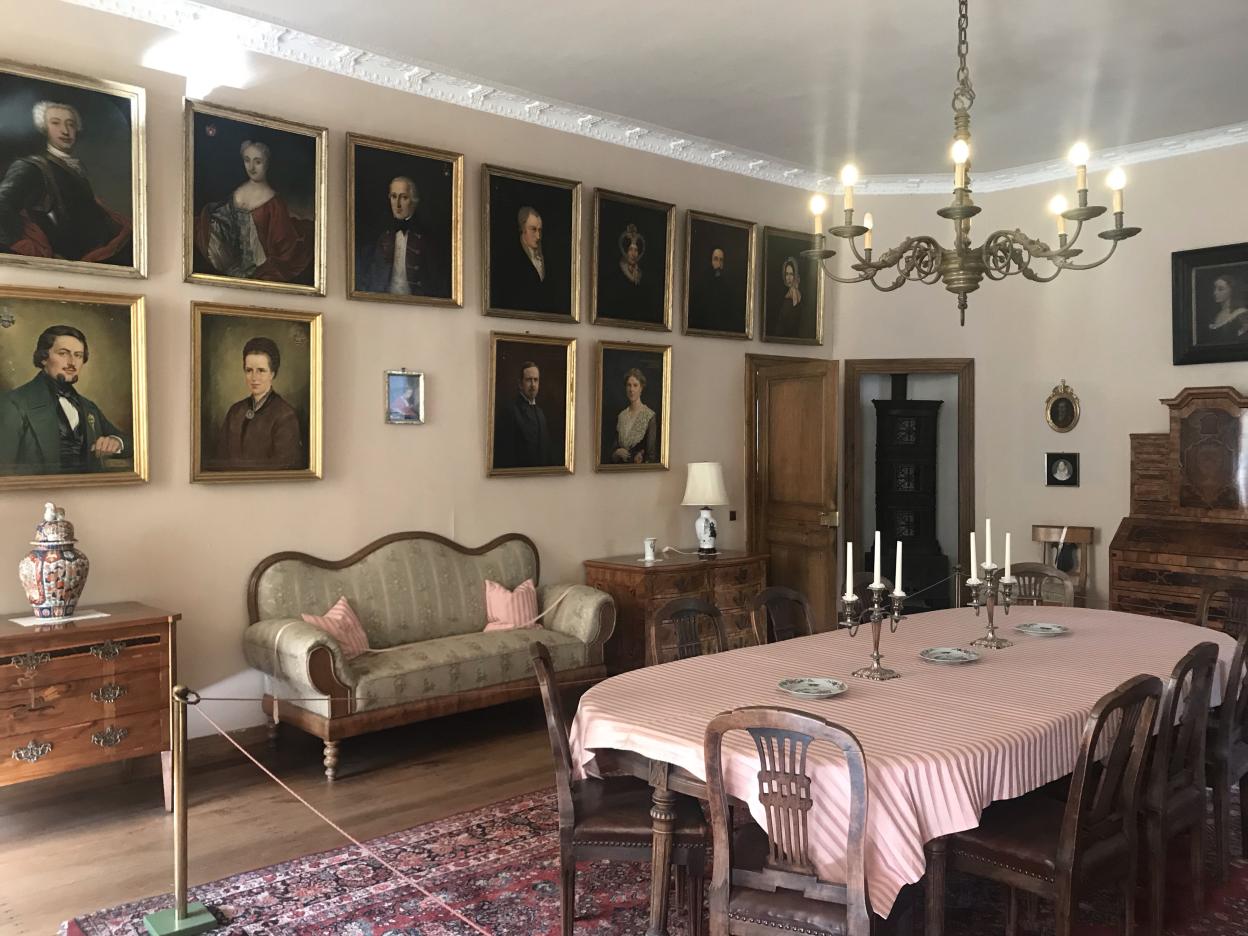 As you can see, the space we have been working for the last week is the “authentic” living environment of the nobility Hülshoff. I put Quotation marks as many pieces of furniture were bought in the ’70s and were used to reconstruct the living environment of Annette Droste Hülshoff out of a vision of how an authentic Biedermeierroom might look like. This is a great showcase on how especially institutions like museums claim to tell the historical truth, but of course, never reveal the circumstances that were influential on how things are exhibited. Most museums still have to deal with a postcolonialist practice, in which a mainly white, male, western perspective is imposed on any kind of object that is getting exhibited. The Book “Museum Object Lessons for a Digital Age” by Haidy Geismar is dealing with that topic. Furthermore, she reflects on how the process of Digitalisation is influencing the way objects are treated and the possibility to overcome the narration of a simple truth, of a single story with the help of digital media.
Here you find a free version of the book:
https://www.uclpress.co.uk/products/108452

So we decided to enhance the museum with another informational layer using Augmented Reality. You could track a certain object within the museum (like a picture of Anette Droste Hülshoff) and then a Video, a Text, an Audiofile would appear. Within that AR layer, we tried to establish a present-day discourse. As during the last week, we’ve been discussing in which matter nowadays societies could be called Neo-Biedermeier. The original epoche of Biedermeier, which was an era in Central Europe that lasted from 1815 till 1848, was marked by wars and political and social upheavals.

It began with the time of the Congress of Vienna at the end of the Napoleonic Wars and ended with the onset of the European Revolutions of 1848. The effect was for society, in general, to concentrate on the domestic and (at least in public) the non-political.

Writers, painters, and musicians began to stay in safer territory, and the emphasis on home life for the growing middle-class meant a blossoming of furniture design and interior decorating.

Neo-Biedermeier, therefore, would be the conservative Backlash in present times: the pull-back into the private household, the regaining strength of the core family, role allocation by biological sex/gender, patriotism, retreat into nature, wellness or yoga. Even the simplification of life and the urge to have a clean and tidy household. For that reason, we had one AR installation, dealing with the Netflix Phenomenon Marie Kondo. The KonMarie method is a way on how to declutter your (which is subject for a museum like Burg Hülshoff, as they are renovating and rethinking the concept of the museum). At the same time, Marie Kondo is a needly dressed, almost perfect looking woman. The suitable example of the sequacious housewife it seems. If you check her website for certified KonMariTM consultants, nearly all of them are women.

Despite its progressive and diverse casting that has become synonymous with Netflix’s brand— Tidying Up’s clients are a range of ages, ethnic backgrounds, and sexualities—Kondo always arbitrarily assigns women the kitchen and men the garage during the “komono” portion of the tidying.

We are deadling with conflict, that was already heavily criticized by the feminist movement in the 60s and 70s. The ongoing battle of unpaid house- and care work as a source for capitalist prosperity, nourished through the exploitation of female workforce. To address this conflict, we implemented a text by Sylvia Federici – a postmarxist scientist, philosopher, and feminist activist, into the Marie Kondo Installation. You can find the complete text here: https://caringlabor.files.wordpress.com/2010/11/federici-wages-against-housework.pdf

It must be mentioned, that Anette Droste Hülsdorf was quite the opposite of what seemed to be expected of a woman at that time. She did not want to marry, she was well educated, wrote books, collected fossils and plants and conducted music. She was far ahead of her time.

There would be much more to talk about, but as you already lack the weekend to read all this, I’ll close it down now. Last but not least, a short clip out of the 80s from my all-time favorite theorist Donna Haraway. Within that short clip, the talks about the representation of nature through humankind (which is a strong topic within the times of Biedermeier as well) She questions, who produces nature? Who names it? Who is representing it? UNPACK THE LAYERS OF MEANINGS!!!

And of course, one part of the installation covered that topic as well. It looked like this:

Ok, that’s it. I hope you had fun reading! See you next weekend.